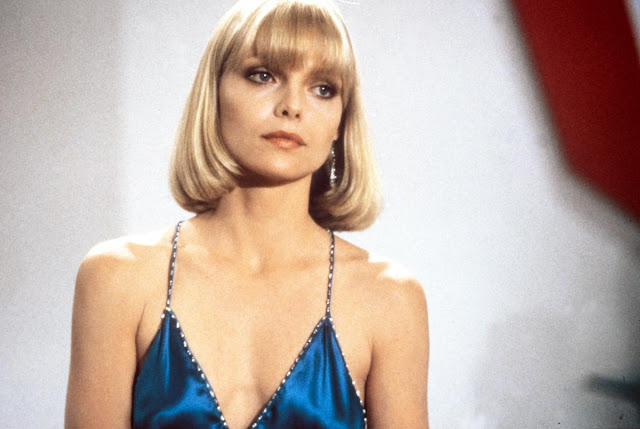 Revisiting—or in a few cases, watching for the first time—and celebrating the work of Michelle Pfeiffer, the best actress of my lifetime.

"Michelle Pfeiffer was a star from the moment she descended in that glass elevator in Scarface—although the automatic prejudice that assumes beautiful people can't act means it took a while for people to see she was also an actress."

— Charles Taylor, in Opening Wednesday at a Theater or Drive-In Near You

Like everyone and everything in Brian De Palma's wildly overstuffed, profane, and bloody morality tale of Tony Montana's (a gloriously over the top Al Pacino) dogged pursuit of the American dream, Pfeiffer's Elvira Hancock is not entirely what she seems at first glance. Certainly, she posses an otherworldly beauty, but she's also fiercely intelligent. Pfeiffer's masterful performance in Scarface (1983) upends our perceptions of the traditional, frigid ice queen trope—while Elvira is hardly impressed with Tony's bombast or power, she's also a woman with little power of her own beyond her sexuality and acerbic wit. Pfeiffer offers a memorably brave portrait of a women who's entire life has been defined by her beauty, and then subtly shows us how this fosters in her a detached cynicism and damaged self-worth. Pfeiffer underplays it all perfectly, making Elvira the cynical female voice of reason amidst the power-hungry and misogynist male egos around her.

Seeing Scarface in my early teens was transformative. The absurd spectacle and epic length alone blew my young mind. I would spend more than a decade watching it at least several times annually. To say I was obsessed with the film's black humor and extravagant violence would be an understatement. Truth be told, I was also more than a little obsessed with Pfieffer. No matter how often I watched, Elvira always took my breath away. It wasn't just her physical beauty, but also her delicately nuanced portrayal of a woman defiantly rebelling against her role as a cocaína empire trophy wife. She smolders with contempt throughout. Every icy glare, every verbal grenade she tosses makes an impact. It's astonishing to realize Pfeiffer was only twenty-four during production, yet she stands toe to toe with the legendary Pacino in every scene they share.

As the quote above notes, Pfeiffer's entrance in Scarface (1983) is indeed the moment where her nascent stardom first exploded onto the public consciousness. At the time, some critics and moviegoers may not have seen past her exquisite looks to realize her tremendous talent, which is a shame. Six years later though, everyone seemed in agreement about that stardom, thanks to her breakout, Oscar-nominated performance in The Fabulous Baker Boys (1989). But for anyone who first saw her in Scarface, including that younger version of me, it was crystal clear from the moment she arrived on screen, a luminous vision in that iconic turquoise dress, clearly too perfect for this world: Michelle Pfieffer was a star.

Popular posts from this blog

It Came From the '90s: My Secret Crush on The Nanny

July 16, 2018
This series looks back at the 1990s and its influence on the generation of people who came of age during the decade.
For six seasons in the 1990s, The Nanny made many of us laugh. At times, it could be downright hilarious. At others, well, not so much. This isn't a review of a '90s sitcom staple, though. No. This is simply an excuse to come clean about something I've kept buried deep inside for over two decades now: I had a secret crush on The Nanny herself, Fran Drescher.

While The Nanny was sometimes quite funny, thanks largely to Drescher's spunky charisma and wholehearted commitment, the show was never considered hip. People my parents age seemed to love it, but my friends preferred, well, Friends.


I watched Friends with my friends, but I also thoroughly enjoyed The Nanny, too. Obviously, I'm aware that much of that was owed to my little crush on Drescher.


She was an effervescent presence at a time when most of my crushes were of the alternagirl, angst-ridden varie…
2 comments
Read more

June 06, 2019
Revisiting and celebrating the work of Michelle Pfeiffer, the best actress of my lifetime.

This year marks the thirtieth anniversary of writer-director Steve Kloves's 1989 masterpiece, The Fabulous Baker Boys. While the film itself is worthy of serious examination, at this time I'm simply hear to gush like the pfan boy I am about Michelle Pfeiffer's career-defining performance as Susie Diamond. After all, this post is part of the 2019 Reel Infatuation Blogathon, cohosted by Silver Screenings. I've certainly been infatuated with Susie all these years, so let's get right into the myriad reasons why.

Pfeiffer's extraordinary turn as Susie catapulted her into a new stratosphere of superstardom while declaring once and for all that she was a major acting talent and a force to be reckoned with onscreen. She'd been building towards this recognition since at least 1983, with her electrifying performance as Elvira Hancock in Scarface. Still, though, critics seemed t…
12 comments
Read more

October 07, 2019
Celebrating Scream Queens that make the Halloween season the most wonderful time of year.

In many ways, Linnea Quigley is the ultimate Scream Queen. A pint-sized bundle of pure punk rock spirit, Quigley has starred in countless horror and exploitation classics: The Return of the Living Dead: Silent Night, Deadly Night; Sorority Babes in the Slimeball Bowl-O-Rama: Hollywood Chainsaw Hookers: Night of the Demons; Creepozoids; Nightmare Sisters...get the point?


Many of these cult classics are from the 1980s and early 1990s, when Quigley first shot to fame within the B-movie world. She was everywhere back then, at least if you were a horror-loving kid like myself. She seemed to pop up in every other splatter flick I watched on USA Up All Night or rented from the video store during those days. Whenever she joined host Rhonda Shear on set, it was like the horror gods had answered our heathen prayers.

October 25, 2019
This series looks back at the 1990s and its influence on the generation of people who came of age during the decade. [This post may not be safe for work, thanks to a gif below.]

More than two decades since its release, the sci-fi comic book movie Barb Wire remains one of the essential documents of the 1990s for a few reasons. As written by Chuck Pfarrer and Ilene Chaiken, the film feels like both a time capsule of the American decade in which it was made, and uncanny foreshadowing of where we've ended up in America today, in 2019.

I'm serious. Hear me out before you sneer.


Maybe you had to be there in order to fully appreciate the absolute lunacy of peak Pamela Anderson media hype. When that infamous sex tape of her and then-hubby Tommy Lee was stolen in 1995, it was uploaded to the still-nascent and damn-near lawless internet for all the world to see—well, okay, for people who had the patience to sit through dial-up's excruciating wait times. Then in 1996 the star of Bayw…
2 comments
Read more

Click here for the previous entry in the Catwomen rankings.


As a young girl, I was completely obsessed with Catwoman. When I heard that Tim was making the film and Catwoman had already been cast, I was devastated," says Pfeiffer. “At the time, it was Annette Bening. Then she became pregnant. The rest is history. I remember telling Tim halfway through the script that I'd do the film, that's how excited I was.
That's Michelle Pfeiffer, discussing her momentous turn as Catwoman in Tim Burton's Batman Returns (1992), from a 2017 interview with The Hollywood Reporter.


It's important to remember, we were this close to never having Michelle’s transcendent performance. Annette Benning was cast and about to begin filming when she found out she was pregnant. After she dropped out, Pfeiffer squeezed into the black latex and the rest is cinematic/pop culture history.

Journey Into the Night with Michelle Pfeiffer and Jeff Goldblum

August 15, 2019
One of the best movies of 1985 came and went without a lot of fanfare from critics or audiences. Then it did what all great cult films do: it endured. Today, that film, Into the Night, remains a favorite among cult movie lovers, especially those of us with a serious affection for the underappreciated "one crazy night" sub-genre. Think Martin Scorsese's After Hours (1985), or Adventures in Babysitting (1987). "One crazy night" films typically involve a character, or characters, journeying "into the night" and experiencing the kind of wild adventures that can only be found in large urban centers after dark. This style of film was especially prevalent in the 1980s.

With Into the Night, writer Ron Koslow and director John Landis turned in one of the sub-genre's best efforts, and a personal favorite of yours truly. The film revels in that after hours "anything goes" style necessary for any "one crazy night" film to succeed. It's …
11 comments
Read more

July 24, 2019
"I dropped out of Oxford, and now I only speak Russian with the woman who gives me a bikini-wax. See what Hollywood does to you?"
"Apparently, I'm very good at firing a gun without blinking, which is unusual. That's why so many action characters have to wear sunglasses during shoot-out scenes. That's my party trick."
"Someone once said that you can make the choice between getting old and getting creepy, and I think getting old is the way to go."
*****

Before I begin, here's a haiku that took me at least ten seconds to write:
Ah, Kate Beckinsale.  We'd gladly live with you, in your Underworld
Yeah, so, I'm a fan.
I've always been a fan of Kate Beckinsale, especially as the vampire Death Dealer Selene in the action/horror franchise Underworld (five films and counting now) and as a young upwardly mobile publishing professional in Whit Stillman's masterpiece of early 1980s ennui The Last Days of Disco, a film that hardly ever g…
Post a Comment
Read more


That immortal line is delivered with extreme chutzpah by our tough-talking protagonist Angel (real name, Molly Stewart), played with a disarmingly effective nonchalance by '80s dream girl Betsy Russell, in Avenging Angel (1985). I'm always on the lookout for memorable cult classic, and with this one, I've struck exploitation gold. I don't know where this movie has been all my life, but thank goodness we finally found each other.


First, some facts. Avenging Angel, directed and co-written by Robert Vincent O'Neill (who worked in the art department on Easy Rider), is the middle installment in the Angel trilogy of films. One day I'll have to run the series, but I can't imagine anything else being quite as entertaining as this one. The plot: a former Hollywood Boulevard prostitute turned law student goes back undercover as a prostitute—but steadfastly avoids schtupping any Johns, to the ch…
Post a Comment
Read more

March 19, 2019
Looking back at the pop culture mainstays of this Gen-Xer's gloriously misspent youth.

Superman III hit theaters June 17, 1983. Because I was a rabid eight year old fan of the first two movies in the franchise—both of which remain all-time favorites as well as two of the best superhero movies ever made—I walked into this one expecting more of the same brilliance. Instead, what I got was something else entirely. With a game Richard Pryor nobly bumbling his way through this mess (all along likely plotting to fire his agent), the brilliance of the first two movies was nowhere to be found. Remember, Lois Lane (my girl Margot Kidder) appears only briefly, as the film's action quickly moves from Metropolis to Smallville for Clark Kent's high school reunion, thus breaking the heart of this young Lois/Margot admirer. It was mostly downhill from there for that eight year old kid.